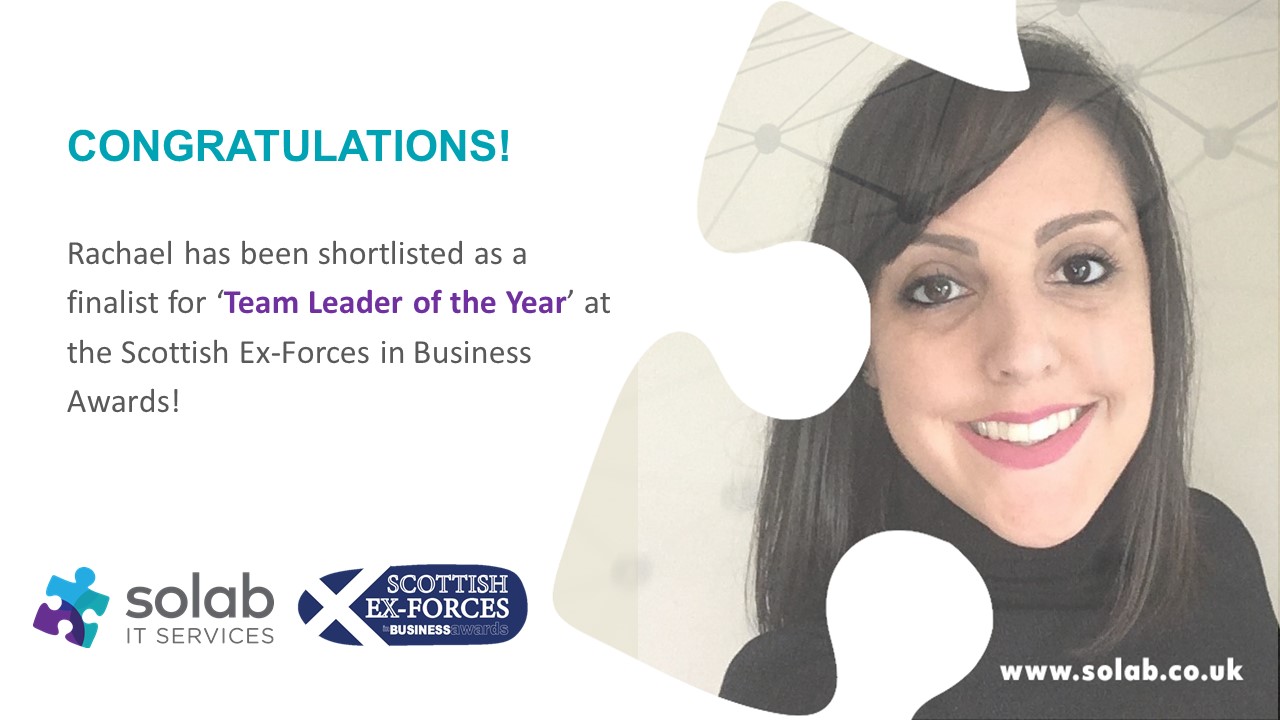 We are extremely proud to announce Rachael Pacey, our Implementation Team Lead, has been shortlisted for the ‘Team Leader of the Year’ award at the Scottish Ex-Forces in Business Awards this year.

The Ex-Forces in Business Awards is the world’s leading platform for providing visibility to role models – military veterans who have carved out successful second careers – that empower and inspire current and future service leavers and educate employers on the value of supporting the transition of servicemen and women.

Servicemen and women spend years adapting to roles and gaining valuable skills. They develop qualities that are incredibly adaptable to commercial environments and in demand in the business world but communicating the transferability of those skills to potential employers can be challenging.

The Ex-Forces in Business Awards celebrates and recognises the value veterans add to businesses by highlighting these military-gained skills and qualities that have helped enable their business achievements as well as recognising the employers and organisations that have supported them.

Our very own ex-forces team member Rachael is an incredible role model.  Rachael joined the Royal Navy straight from school as an Operator Mechanic in Communications in the Warfare Branch. After basic and trade training, Rachael Joined her first ship HMS Southampton, a type 42 destroyer based in Portsmouth, where she served on her for 4 years, gaining promotion.

In the 4 years onboard HMS Southampton, various deployments saw Rachael serve across the globe. HMS Southampton was part of the task force in the Gulf as aircraft carrier HMS Illustrious’ escort in Operation Veritas. Rachael went on to join HMS York as a Leading rating, another Portsmouth-based type 42 Destroyer for 2 years.

After serving for 7 years Rachael left the royal Navy and spent 2 years in London, working for the Security Service then relocated to Scotland in 2009. Rachael spent 5 years working for Police Scotland in support roles before moving into the Oil and Gas industry for Lloyds Register, where she worked her way up from Logistics Coordinator to Global Logistics Manager for the energy division.

Earlier this year a member of the Scottish Ex-Forces in Business Awards reached out to Rachael on LinkedIn and asked if she would consider entering a nomination based on her career history and current career. After learning more about the awards, and the work they do highlighting the value that Ex-Forces personnel can bring to business with their transferrable skills and experience, Rachael felt it was important to communicate her own experience and career after leaving the Royal Navy.

The Scottish Ex-Forces in Business Award ceremony will take place in Glasgow on the 19th August, we hope Rachael and her partner have a lovely time and wish her the best of luck!